I love the little train! 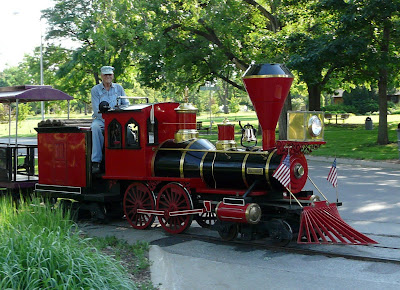 When I moved to Topeka in 1974 I was already an adult, though arguably not a grown-up. I discovered this little train in Gage Park and very much wanted to ride it, but I felt silly getting on it with all the children and their grownups.

So after a friend had a baby and he grew up enough to ride the train, I used to "borrow" him and we'd go to the park and both happily ride. I liked the scenery going by; he was more taken with the train whistle and the engineer.

The train was refurbished sometime in the last few years, and it's looking pretty spiffy now!
Posted by Kris H. at 4:42 PM